A cause and effect situation is what we desire when you perform well. When you are playing golf and you hit a great shot, you want everyone, including yourself to know. The ball may not go very far but that sound you hear? That click? Is what many golfers just play for.

This is the cause and effect experience I am talking about. You swing and hit right, you want to hear it. But, not all clubs and not all balls will let you have that pleasure. You need both the right club and the right ball construction for it.

Let us focus on the ball here. There are many great golf balls out there. And, the Titleist Avx golf ball is certainly one of them. Has Titleist ever really disappointed golfers? Rarely.

This Titleist AVX Golf Ball Reviews will tell you about the features and what makes it suitable and also not suitable for you. One thing you can be sure of about it is that it produces one of the best sounds there is.

For your better information, you can find out more blogs about Golf Outfit and Golf Cart Batteries Last 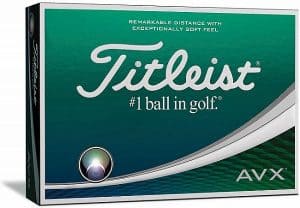 So, what makes the Avx ball what it really is? Let’s find out.

Let’s start from the inside of the ball because that is what is valuable, right? Apparently, with time, you will notice that golfers prefer softer cores more. And, that is exactly what this AVX golf ball has.

This is partly the reason behind the ball creating such a beautiful click when you hit it right. You will love how to feels ball when you hit it in the game. In fact, it won’t seem like you are hitting a rock as it feels like with many other balls like, Pro V1 or Pro V1x golf ball.

Furthermore, softer core balls usually have a higher spin. But, the AVX ball does not. This is because of its innovative design which includes the other parts of the ball.

The Titleist ball has a high flex casing layer. Therefore, it not only gives you more control but also helps with the distance. Under the Urethane cover layer provides more powerful ball speed than is typically expected on a softer ball.

Also, it works with the lower-compression, high-speed core to produce more speed and distance. It is most noticeable on long and mid irons, providing lower spins.

This is also one of the reasons why the ball has a low spin despite having a softcore. All the layers of the Titleist AVX combined make it what it is. In other words, you say that each part balances the other. The softcore is balanced by the outer layer.

Only when you are an engineer will you be able to understand how much difference just little changes can make. You can understand simply right now, but how do engineers do it? I always wonder.

Apparently, dimples are a simple part of the golf ball, and the AVX designers manipulated it a bit. Instead of getting the traditional shape and depth, the AVX ball got 352 spherically tiled catenary aerodynamic dimples. Apparently, the dimples are shallower in-depth and have more sharp edges.

How does it affect the ball flight? Well, the sharp edges naturally create more resistance. As a result, the ball has a lower flight (fighting the nature of the softcore again).

So, you see, small changes make a big difference in this case. Small changes in the form of dimple designs.

Titleist advertises this ball as a low spin, low flight, and long-distance one. And, that is exactly what it is. The low flight makes you go a few yards more. Furthermore, the dimples reduce spin and flight as well. With that, you manage to go even more straight.

When you are using drivers, you have the lowest flight. With the increasing number of iron shots, the flight also increases. So, you do not have anything to worry about in long games.

The trouble is with the short game. The ball will be a bit slow around the green and you will have to hit it harder. Otherwise, the AVX Titleist will be stuck around the green.

For your better performance, you can find out more review about Garmin Golf Watch and Callaway 300 Pro Laser Rangefinder.

1. What is the compression in the core of the AVX ball?

The new Titleist AVX ball has low compression in its softcore.

Apparently, the AVX has lower spin, lower launch, and a softer core than the Pro V1 and Pro V1x. Thus, it usually provides a much better feel.

The Ball Titleist actually impresses most golfers as a premier golf ball out there. However, whether this ball will suit you or not completely depends on how you play- your swing and style. If you talk about the price, then you have to admit that it sure is quite expensive.

Then again, you get the quality of Titleist balls with it. You know that these balls will last you a lifetime and also give you performance that many other balls failed to give you. So, these are not a bad choice to make. It is worth giving these balls a try.

For more fun click here and get an idea about Footgolf which is a combination of soccer and golf.

How Wide is a Golf Cart: Know dimension

How Wide is a Golf Cart? It’s a bright sunny day outside, so gear up …