Putting is one of the essential parts of a golf course. While the rest of the golf club offers you a lot of forgiveness and space, putting does not. You must be accurate when putting, and there is no room for mistake. One small twist of the hand and you have earned another stroke.

You have to consider everything when putting. In fact, you have considered the line, the slope, the distance, and the strength of the swing. You even have to consider how long a swing you are taking. Now, you get the point, putting is very difficult.

While I cannot completely say that the right putter will make things easier and better but I can say one thing- it surely will support you better. The rest depends on your practice and will power. Well, accuracy as well.

This is one of the most famous putters out there. It is expensive but for good reason. In fact, it does ease up the putting experience a bit and it is even suitable for those greens with a lot of slopes.

So, is the S7K putter for you? Let us find out through the review.

Why exactly do people like and dislike this Putter? The features will tell us all about it.

What did we say was important while putting? Accuracy, line, swing, what not? But, most the direction- the track. With ordinary putters, you have to place the Putter, then hold in place with one hand, get behind it, and see if the line goes where you want it to go.

With this Putter, nothing like that is necessary. You can place the Putter behind the ball (Titleist AVX, Vice Tour, and many others), and you will see three lines from the top.

The two outer edges will be parallel to the outer lines of the hole, and the middle one will point directly at the center of the hole. Isn’t that crisp and clear? You will be more accurate as you won’t have to worry about lines so much.

Now, most putters claim to stand and do stand but on a plain ground. This one stands perfectly on slopes as well. Therefore, putting anywhere will never be a trouble for you. You can just fix the line, keep the Putter as it is, leave it and get behind the Putter to check if the line is alright.

Even more, you do not have to adjust the angle when you come back. The Putter is made in a way that it stays in the angle that is ideal for you to hit the ball, although very few customers mentioned that it does not do so well at standing in slopes.

The SK7 has the ability to almost set up itself and can help golfers level out their missing angles and start the golf ball down an accurate line.

Everything is usually perfect when you are ready to putt it. You know your line, your distance, your swing, everything. But, something just always goes wrong, doesn’t it?

What goes wrong is your swing. Under the intense pressure, you crack, and your swing goes astray. The trick is to keep your eye downwards and not lift your head when you hit the ball. It ruins the rhythm. The swing does not go straight.

To help you with this, the Putter has a striking dot on it. When you focus on the golf ball right with the strike dot, you do better. While it will not completely fix your problem, it will get better.

This Putter has quite a durable build with perfect alignment. It has a head that made of stainless steel and a shaft also that is made of graphite. According to many, the head is a bit heavy. But, it does help you to gain more control, so that is more a pro than a con. However, the unit tends to get rusted easily when wet. And that is not something you expect from such an expensive group.

Then comes the grip. It is made from EVA foam. While EVA foam is light and comfortable, it may not be the greatest at providing you with a firm grip.

This s7K stand putter has a length of 34.5 inches, which is quite good for a putter. The loft is 3 degrees. And, it has a high MOI as well. 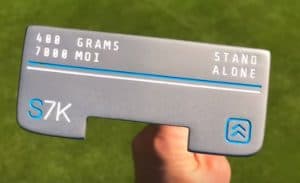 1. Can you change the grip?

Answer: You can, but when you do, you may experience a falling putter rather than a standing one.

2. Is this Putter legal for tournaments?

Answer: Yes, it is according to the rules of golf. It has been approved by USGA Club so you can rest assured.

Answer: Yes, it comes with a cover. 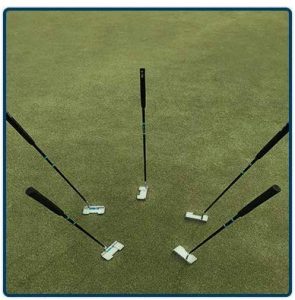 The s7K Stand Putter is an incredible one not only in the build but also in the design. How many putters out there help you to become better at putting? While many intend to not many are successful.

But, this one with it’s attention to details is quite successful in improving your putts. Furthermore, the weight and build provide a great balance feel to your hands when you are using this putter. While it does come at a price and with a few cons, it entirely is worth it. As for the rust issue, you can deal with that by not keeping the Putter wet at any cost.

So, most of what I have to say about this Putter is good things. You can seriously consider it if it’s the right length for you. you can find out more reviews if you are interested in Best Driver for Beginners and Callaway Rogue X Irons.

How Wide is a Golf Cart: Know dimension

How Wide is a Golf Cart? It’s a bright sunny day outside, so gear up …